How to remove bias from recruitment with the help of gamification 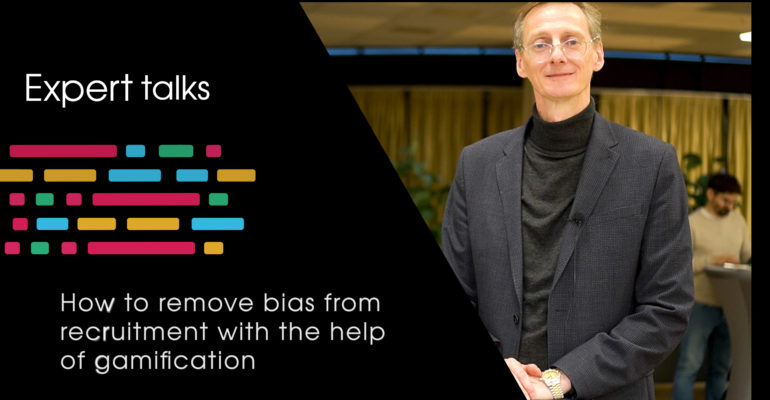 How to remove bias from recruitment with the help of gamification

Today we have with us Robert Newry of Arctic Shores.

And let me start by asking: why the name?

So the name of Arctic Shores came about…

Because we were thinking about our company, what we were doing.

And we wanted to bring games, which was about play and fun, into the world of psychometrics, which is about science and seriousness.

So we were thinking, we’re doing two things that are in contrast and we needed a name to get that message across.

My mother is German and I was brought up Christmas Holidays, Easter Holidays, always going to the Alps and skiing.

So I love all things snowy and arctic.

And my co-founder’s, Safe’s, family originally from Egypt.

He was born in the UK, but his family is from Egypt.

Plenty of snow there?

Plenty of sand, and…

And we thought, oh, you can have…

Could you have snow and sand as two things people don’t think about together.

And so the name Arctic Shores, to people – contrast.

And what you do is gamification.

One of the elements of games or gamification really, is to have an epic meaning.

And you’ve actually really nicely explained your epic meaning during your talk.

If you could explain it to people who couldn’t attend your talk, ok?

The problem that we really wanted to use gamification to help was tackle this issue of bias in recruitment.

And bias comes in many different ways.

It comes from people looking at CVs and seeing something they like or they don’t like and then selecting somebody to come forward.

Bias comes in interviews as well.

And we thought we could really tackle that by finding a process that was more objective.

So bringing some fun, bringing some data and objectivity and have that as a data reference point and remove bias from the recruitment process.

And get more diversity, which is, you know, so important to success in companies.

And did it work?

And it has worked really, really well.

The example I gave today in my talk was with Siemens, where previously they were making job offers to about 15% of people applying that were woman.

And then after they used our application, that jumped to 31% job offers going to woman.

So you can make a really step change improvement just by introducing a different concept.

Because of the game mechanics and the game interface use sort of skip through the unconscious biases.

Because we’re not saying that the recruiters are bad people.

And what I really love and I really strongly believe in about that is people have this concept, that it’s either serious, meaning proper, or a game, funny.

And the gamification is actually more fun and more correct.

There is lots of data going on.

And actually data is something that you are very strong on.

So yeah, what’s the core concept?

Yeah, and this was the interesting thing for us.

When we initially looked at gamification, we were thinking about engagement.

How do you get a process that is traditional and boring, and make it more engaging for the candidates?

But we soon realized that the power of gamification is in the data that we collect.

And we pick up 12 thousand data points from a 35-minute session, and so we can learn a lot more about a candidate and their suitability for a role than in the traditional recruitment process.

And so for us gamification was really those…

Then the diversity will just come as a result from getting those things right.

So another thing I’ve learned about gamification.

Then we practice it and improve it, but I love talking to people who actually applied it and it works.

And what I mean by that is you get people excited about something that they don’t know that they need to do, yeah.

It’s like brushing their teeth or running for your health, or whatever it is.

You know it’s wise to do it, but somehow you hate doing that or at least don’t like it.

And the recruitment process is a difficult one for both sides.

Like, I don’t want to say that everybody hates that, but it’s close sometimes.

And making it fun and more accurate is a great goal to have, so congrats on that.

And your recruitment, the ethics.

I love your approach, could you tell a bit more about that?

Yes, so everybody is excited about, this is a new idea and suddenly game based assesment, so a new idea.

And then artificial intelligence, is this the new idea?

And because we’re very science-based and that’s been important to us, so yes, you want to bring engagement, yes, you want to do something new, but you have to show that there’s some science and proper foundations behind what you do.

And the challenge was that AI has many benefits that it can bring in terms of processing data faster, finding links that a human might find hard to do if they were doing it on their own.

The problem I see with black box vs white box is that there are many companies that are coming in with AI that weren’t explaining how does the artificial intelligence algorythm work.

How do they find that corelation?

So in example I explained, gave today, about, you know, pirates and warming seas, you can get a corelation between things that we know as humans, when we look at it, are wrong, but a machine wouldn’t know.

And in a black box, that’s what happens.

And I think one of the challenges for HR is there’s all this new changing in technology, all these new ideas coming around, but there also needs to be some education and understanding that not everything that is AI is good.

And you know, Amazon found this problem.

You know, they were using AI and they didn’t…

The bias was the other way.

Yeah, so the AI could be biased if we don’t get…

If we don’t get the white box, you don’t get to look inside and say: “Show me why that data correlates”.

I might have personally this one bias or perhaps either talent, I always find in someone’s talk something that I can agree with or is the same that I think.

And one of the elements that I really liked about, you’ve made three important points.

And one of them was: the recruitment process is not a game.

“And it’s just a journey through the countries? You know, it’s a bit dull, it’s not game”.

But yeah, you also found out that in some contexts you want it to be gamified, but not too much of a game.

And I think that that is being one of the challenges for us in the industry of gamification, that we have…

Actually, if you’re in gamification, you know that you can make something more fun without having to bring dragons.

or normally I get asked: “Is there anyone getting shot, any shooting that goes in your games?” and they go: “No, no, no”.

The whole point of gamification is how do we make it engaging, how do we want people to act in an authentic way, but we don’t want to trivialize what’s going on.

And it is that balance and it’s a very fine balance, again.

You know, we’re on our fourth alteration now of our assessment to get that right.

And, you know, that’s the nature, I think, of when you’re a pioneer or an innovator.

You never get it right first time around.

And, you know, James Dyson, one of the people I always look to, 5000, over 5000 versions of his vacuum cleaner before he found the one that worked.

So we’ve done four since…

Now he’s in his first alteration for electric car, have you heard?

Of course I have, yes.

This is the newest project, I also follow Mr. Dyson very closely.

I love the interplay between British and American.

“I want to show you done it British way”.

Anyways, so one more of the questions I had is, you mentioned that AI was created, the first implementation…

The first time that the world… Yes.

Heard about AI, is to beat human.

So perhaps that’s one of the reasons why, and plus the movies, blockbuster movies,

making us scared of AI.

And I’m just thinking, for all the recruiters that are watching us or listening to us and thinking: “Ok, should I gamify my recruitment? But then, if you attach AI, perhaps I will be unnecessary and it will, you know, get me out of my job”.

So is there any calming words from you to them?

Or what would you say?

Sure, no, definitely, I get asked that question all the time.

And the reality we’ve seen with our clients is that in the world of HR, you’ve got so much to do.

You have so many people applying, some many issues that are coming out, you know, candidates are doing things that they shouldn’t do or their applications got lost.

So you’re being inundated with all these things to do and there’s never enough time.

And actually, as an HR person, what do you want to do?

You want to engage with people, you want to talk about the exciting things. Why would you like to come and join my company?

You don’t wanna be processing, the human part.

And they never get the time to do that, because there’s all this other process stuff that goes on.

Now if we can make the process stuff faster, easier, more cost-effective and more engaging, and take that off the HR person’s plate, then they can do the stuff that they want to do, and actually, the candidates want to do.

And they identify: here is a candidate that is a really good fit for this role.

Then rather than being lost in the recruitment process quickly, go and talk to them, engage with them, pick up the phone to them, send them an e-mail or a marketing message that keeps them engaged.

Then you’ve made a difference.

And that actually makes that job a lot more engaging for the HR person, so don’t worry.

So guys, you’re assured, yeah, don’t worry, let the artificial intelligence do the inhuman part of work, because it will actually, sorry to say that, do it a bit better than us humans.

But then, you’ll have finally the time to be human, because now you are so overwhelmed with work, that you’re nice people, but you don’t reply to candidates.

You don’t want to do that, but you’re so overwhelmed with work.

So let the robots and artificial intelligence do the staff that they do better and we, humans, will have time to do human work.

Thank you very much, Robert.

For this talk, it was pleasure meeting you.

It was a pleasure meeting you too, thank you for your time.

Feel the atmosphere of victory

Design thinking and the science of learning.

Can gamification work for a school, a restaurant and an goverment agency with similar results?

How Al and gamification can support digital transformation?

Can running be fun? Zombies, run! – A superstar case study of gamification